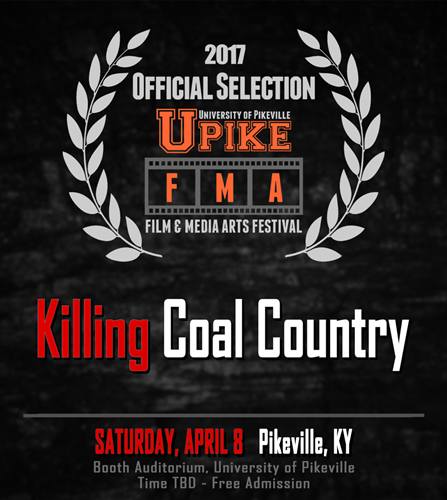 Killing Coal Country, a documentary about the decline of the coal industry in Appalachia, will debut at a film festival in Eastern Kentucky early next month.

The documentary will screen at the University of Pikeville Film and Media Arts Festival in Pikeville, KY on Saturday, April 8. The screening will take place at 5:15 PM in the Booth Auditorium on campus. The festival will be open to the public with free admission.

“I am very excited about this opportunity to show my documentary,” filmmaker Slater Teague said. “A lot of filming took place in the Pikeville area, so this is a perfect location to debut my film.”

Teague, a recent graduate of East Tennessee State University, filmed and edited Killing Coal Country entirely by himself. The documentary was originally a project for one of his Mass Communication classes at ETSU. Eventually, he decided to turn his school project into an independent film.

“This is the most ambitious project I have ever undertaken,” Teague said. “I am thrilled to finally see it come to fruition.”

The documentary is about the recent decline of the coal industry in Appalachia. It exposes the so-called “war on coal” and reveals its devastating impact on coal country.

Teague says the war on coal is a regulatory and legal assault on the coal industry by federal agencies like the Environmental Protection Agency and environmentalist groups like the Sierra Club. This, combined with other factors such as the recent boom in natural gas, has led to the loss of over 80 thousand jobs in Central Appalachia, according to Teague.

Can’t make the festival? No problem. Starting on Tuesday, April 11, Killing Coal Country will be available for online streaming and download on Vimeo on Demand. It will also be available on DVD, however, supply is limited. For more information, please visit www.killingcoalcountry.com.

The UPIKE FMA Fest is an annual film festival sponsored by the University of Pikeville Film & Media Arts program. The two-day festival will take place on Friday, April 7 and Saturday, April 8 and will screen films from high school students, college students, and professional filmmakers. At least $1,000 in awards will be given out. For more information, please visit www.fmafest.org.