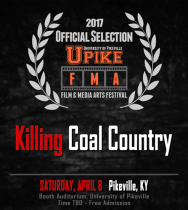 Killing Coal Country, a documentary about the decline of the coal industry in Appalachia, will debut at a film festival in Eastern Kentucky early next month.

The documentary will screen at the University of Pikeville Film and Media Arts Festival in Pikeville, KY on Saturday, April 8. The screening will take place at 5:15 PM in the Booth Auditorium on campus. The festival will be open to the public with free admission.